Today I jumped out of bed bright and early to take some photos with the alpine homes while no one was around. We had breakfast and talked to a trekking couple who were traveling as a pre-honeymoon. They didn’t pack sleeping bags and only used the tea house blankets… brave souls!

We took off for Khangsar where we would inquire about Tilicho lake/ base camp being open. To be honest I wasn’t so excited about that part of the trek. Something happened to me with this attitude, I’ve had the worst depression and anxiety I’ve had since 2013 and as icing on the cake, mild AMS symptoms, and headaches. I blame the crazy vivid nightmares I’ve had literally every night since starting the trek.

This trek is definitely harder and more taxing on the body than Everest ever was. When the body continues to be broken down each day physically that leaves more space for the mental part of your body to take over and rule for a while. Mine isn’t in the best state to be fully in charge of my body so I’m having trouble regaining control. I constantly worry about everything from love to work and finances and when I look at the position I’m in I’m not entirely happy, which started the cycle of bad thoughts, only to be brought to life at night in my sleep. The tea house is both prison and relief at the end of the day.

After sharing a plate of momos and tea we made our way to Khangsar by way of a huge incline. I had a migraine in the process but managed to explore the shining red monastery at the bottom of the village without much issue. One more steady and steep incline up and we were in Khangsar. This village (oddly perched above the monastery, usually it’s the other way around) is nestled in the mountains with a perfect view of Tilicho peak and the menacing mountain before it. We sat and rested in the tea house as the clouds rolled in and now I can say we are in the clouds completely! The mountains have disappeared in a haze.

Our tea house was like a ghost town, just us and our hosts… the town looked boarded up for the most part. It kind of reminded me of that scene from The Shining, you know the one?

Today came in like a lamb and out like a lion. We jumped into a snowy trail all full of energy. The sun on our face was a nice relief from the cold and lonely tea house. We took a break and sat under the clouds as four eagles soared above our heads. We shared cookies.

The second half of the trek, to our surprise, was completely snowed over! We ended up trekking. 3+ hours in waist-deep snow. As our boots filled with snow and became wet every step felt like a mile. We had a quick lunch and were informed that we had three hours left to trek. No way I could do that in my boots, Nara offered me his runners but I opted to hike in my toms. The next three hours were complete hell, I was freezing from top to bottom, the wind was relentless and the mud and snow wouldn’t stop. The only relief was coming upon a herd of cute mountain goats who were promptly scared off by naras Buddhist chants courtesy of his Bluetooth speaker. I was ready to die by the time we reached our tea house. Yesterday’s was nicer but that’s how it goes on the trek. You win some and you lose some. Mostly you lose some.

Today we got off to a slow start, it had snowed overnight and Nara thought it would be best to wait until 9 to start. I wish he would have told us that before so we didn’t have to wake up at 630.

Today was also the worst day ever. I don’t have much to say about it except: exhaustion, tears, migraine, steep climb, snowy hell.

The tea house was busy in the evening with several groups deciding what they’re going to do about the pass tomorrow. The dutch group were going first followed by us, the Japanese couple and two French couples. We hope we can make the pass. I just want to get out of here.

The lightless tea house was a buzz this morning (4am) with trekkers in headlamps having breakfast and packing their bags to go. Most people are going to try for the pass today.

Today makes yesterday seem like a joke. The trail to the pass seemed never-ending, it was cold and windy and awful. There was an extremely steep section that was covered in snow then we passed the section where there was a semi-recent avalanche, killing some trekkers. I couldn’t help the morbid thoughts that we could be passing by them without ever knowing. This part of the trek was very dangerous. When we reached the Thorong La Pass sign our guide and porter were very excited, all I wanted to do was continue on and get the day over with. This wasn’t anything like the excitement I felt when I finally reached Everest base camp, quite the opposite actually. Nara made us take a photo, which in hindsight I’m very thankful for, but at the time I was beyond irritated and tired.

We trekked about 12 hours today and I was absolutely exhausted and the intense sun and snow from trekking down the other side of the pass gave Blair and me a horrible sunburn.

We had to walk three more hours from the bottom of the mountain to our tea house in Muktinath and I thought I would actually drop dead. We ended up staying at the Bob Marley hotel which is where tons of people we saw along the way were staying too. We had dinner, took a shower, and promptly passed out.

Today was a better day, I was finally able to get some cell service and talk to my friends. We slept in, had breakfast, and the most amazing coffee I’ve ever had, then Nara took us to the Shree Muktinath Temple that we passed along the way in.

Today is Holi in Nepal and all the people were out visiting the temple and playing Holi.

There were lots of people visiting from India and Nepal and Nara took us through the temple we lit incense and prayed (still such a foreign concept to me) we ran our hands through 108 water spouts that bring Holi water into the temple and washed our hair with it (ran it over our heads with our hands occasionally) it was a peaceful and amazing experience. Both Hindus and Buddhists make a pilgrimage to come here and it’s lovely to see both religions come together like that.

In the temple, we donated to the Buddhist monk and received fruit, as well as the Pujari and we were offered tika. Nara took us to the large Buddha statue where we also saw another very old temple. The monks were so kind and it was a wonderful experience to be there.

After that, we grabbed our stuff from the hotel and walked through the small town to catch a taxi to Jomsom and then Marpha. This small town was so lively it was so nice to see everyone out selling their wares and foreigners riding horses to the temple. Some young people were colored with powder from playing Holi and they had this grin on their face of pure happiness. This place kind of reminds me of Namche on the EBC trek, we were waiting to see a cute town like this.

After a bumpy taxi ride, we landed in Marpha. This little town, quite different from Muktinath, was bright and sunny and lovely! A small channeled river ran along the streets and eventually under it, we could hear the water rushing as we walked by. Children were out playing in the sun. It’s such a nice change from the cold bitter mountain. We checked into a hotel and had lunch. This town is famous for apples and apple products (aka cider) which I couldn’t wait to sample. Being at a lower altitude means we can finally drink again.

Part 3 Including the Poon Hill trek coming up next week! 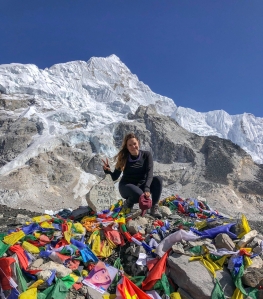 Thank’s for stopping by my blog, I hope you enjoy reading about my adventures! I love to write about solo, budget and sustainable travel! I also have a soft spot for finding hidden gems when I travel ;)

I would love to hear from you! Please feel free to leave a comment or send me an email, I’ll always do my best to respond as soon as I can!